Nothing much exciting to report in the last week; some more boney items have been added to my list (see below), I am working on a gallery page for the blog to display all my crafted items, the experiment in production of verdigris has been partially fruitful (also see below) and finally I allowed myself to get seven bells beaten out of me on Sunday by some viking newbies – that’s what I get for being my groups combat training officer.

First show of the year! – Bamburgh

It has taken some time to get here, but finally I have my first show of the year in a couple of weeks. Over the bank holiday weekend, my local viking group (Northumbria) and a few other individuals will be populating Bamburgh castle in Northumberland. Hopefully the weather will be similar to last year and only rain a little bit while being mostly sunny.

If all goes to plan then we should have a pleasant few days of crafting and fighting in nice surroundings. If not, then we will have howling winds, mud, rain and lots of blood (probably mine^^).

I have been meaning to do these for some time but also seem to get distracted and manage to forget, but on Saturday morning I hauled myself out to the shed sometime before 8 and got on making…. DICE! I know they are not terribly important, special or even hard to make but somehow I just hadn’t got around to making them yet (partly because I would need to make myself a new ring-&-dot tool that was small enough). 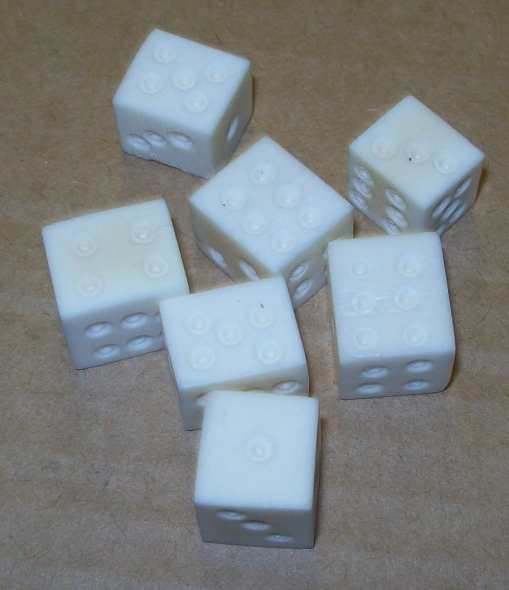 They are not perfect, but that is due to the fact that they are supposed to be accurate Viking dice which are not always perfect cubes. The numbering varies as well – some are found with “conventional” number (i.e. opposite side total 7) and others where 1 is opposite 2, 3 opposite 4 etc. One thing that is highlighted by the above photo is that the numbers can be pretty hard to read from the wrong angle. It would be a simple matter to blacken them, but evidence for blackening on bone items is rather sparse during the Early medieval, so I will have to think about it a bit more before deciding.

As well as dice, my collection of weaving tablets grew somewhat, and at this months group training session I had many of the ladies ohhing and ahhing over them. Methinks I can sense a commission in the near future 😀

The Halldor collection of Early Medieval bone writing implements also expanded with the addition of a pair of styli – one from Whitby (top) and one from York (bottom).

I also started to make a copy of a “burnisher” from York (supposedly used for smoothing parchment while working) but got a little distracted and it all went rather wrong, so it isn’t a replica of the original but possibly could still be used as such, or even a seam smoother for sewing.

As I mentioned in my last post, one of my future experiments involve dyeing bone green. In order to do this I set up a small verdigris production jar. While some of the copper did indeed produce a fair quantity (see photo below), it was really only the outside pieces in the bundle, there was just not enough space for all of them to react sufficiently with the vinegar fumes. I think a more efficient method would be to use something like a casserole dish with a wire rack and then support the copper pieces on their edges so that they get maximum exposure.

Having scraped the verdigris from the plates, I also think that totally fresh flat sheets would be easier to work with rather than reused and hammered pieces as they are awkward to scrape properly.

The top piece has been exposed to vinegar fumes for a week, the bottom piece shows what it was like before. There is certainly a reasonable build up after only a week, but unfortunately only 2-3 plates out of 15 were like this. Hopefully I will be able to build a more efficient setup soon and start produce larger amounts.

I have yet another project up my sleeve, I am not giving away any details yet but if all goes to plan it should be up and running in the next month or soooo..