One of these items is a non-fighting (i.e. sharp or semi sharp) sword fitted with bone or antler fittings. After having this on my list for some time (the blade alone has been lurking forgotten in my shed for over 6 years) I finally got around to doing it over these last couple of weekends. While the entire sword is not based on a particular find, the various components are.

The pommel is a 5 lobed example that is very similar to a find from York made of whalebone. The cross-guard is again based on a find from York (originally in antler) and the blade is a fairly generic 10th century style, tapering along its length and with a shortened fuller. The grip itself is of ash bound in leather. While the above photo shows the overall sword, the fittings are over lit, so here are some close-ups to show better details. 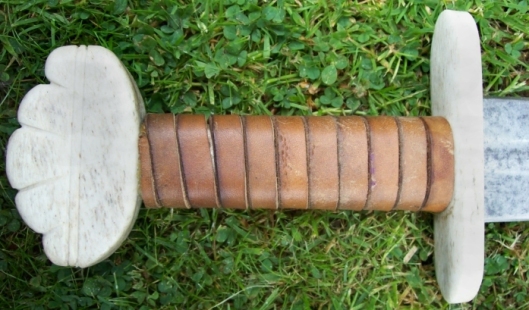 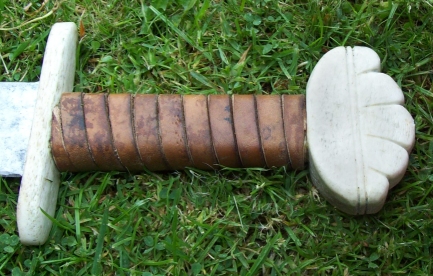 I am aware that despite both of these find coming from the same city and both being of approximately the same date, it is highly unlikely that they were ever paired or even that two bone fittings would be used together (though not impossible). However, it is how they are displayed in the museum, and as they look nice as a pair I thought a little bit of artistic license wouldn’t matter.

Despite the obviously fragile nature of dry bone, it seems to cause little issue these fittings, because despite being structurally similar to lamellar bone, antler is about 3 times as strong and much less brittle (hence making comb teeth and riveting it). Additionally, whalebone acts and works more like antler than the bones of land mammals. So both the cross-guard and pommel would be able to withstand blows in combat without shattering. They would certainly be chipped and would maybe give up after repeated blows to the same place (such as the cross-guard near the tang), but otherwise they would be suitable on a combat blade.

Due to the lack of weight below the hand, the sword is not ideally balanced and does have a tendency to want to “hack”, making it quite difficult to control or pull without wrists like Thor. This does not make it an elegant weapon at all, it is ill-suited to quick movements and parries, but it is rather good at the neck or shoulder crushing downward swipe.

So now that that later period sword has been finished (except possibly some silver wire recessed into the pommel), that is one thing off my list. However, it did make me add something else – now that I have a later period sword, why not do an earlier style blade with horn fittings? 😀

Something I am occasionally asked about regarding small bone items is the provenance for tools such as leather stamps and creasers. The problem with these archaeologically is that when wooden handles decay, you will be left with a tiny sliver of bone that can be easily overlooked or misidentified as waste. This is compounded by the fact that you don’t find a “leather worker’s” grave with all the tools nicely bundled around them. In fact this only ever seems to happen with smiths of one kind or another. This means that you would be looking for discard, lost or broken tools in urban sites rather than in helpful collections in burials, which obviously means that the chance of finding something plummets.

However, in a similar vein, we know that bone and antler stamps have been used for thousands of years to decorate pottery and stamps made from tines have been found on Anglo Saxon sites (and nothing stops these from being used on leather as well). So the idea of a small set of bone or antler tools for embossing or tooling leather is really not particularly far fetched.

The reason behind that little discussion is that I was recently asked to make an assortment of tools for a leather worker in my group. The aim was to assemble a small selection of tools that with time and skill could be used to create the majority of the known examples of tooled leather. Obviously modern style multi-part wheels, swivel tools etc were out and we were just looking at simple creasers and such.

In the end this is what I came up with, partially based on my own experience of leather working and partially based on what my groupie needed. There are an assortment of different wedge shaped blades, a R&D stamp, square and triangular stamps. 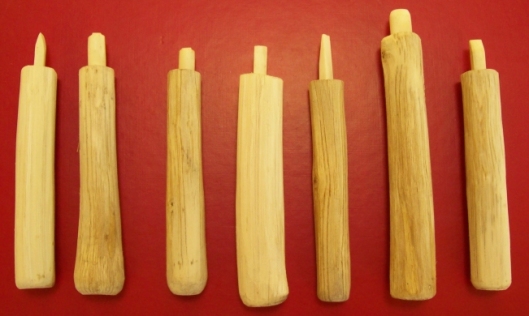 Below is a close up view of the stamps. The ring-and-dot stamp has a metal pin as it was easier to make an even ring that way rather than trying to hand-cut out the circle and leave a central bone pin (it also makes it stronger).

Another close up, this time of the wedges/creasers. 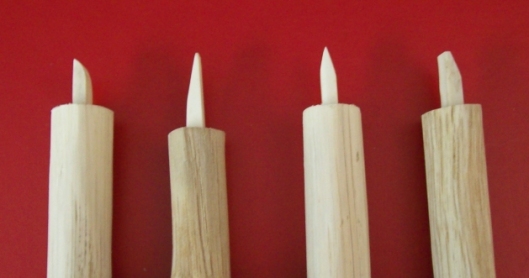 These are just a basic set and once I do some further research into the patterns I am sure that other tool shapes will be come apparent as being useful.